This is a picture of Holly, she was (and is) such a smiley baby. You might think that this photo would bring back feelings of joy and fond memories. Actually, I find this photo incredibly hard to look at. Despite being an experienced baby sleep consultant and Mum of one, I had post-natal depression. This blog is about my experience, I don’t really know why I’m telling this story. I hope it helps though.

I didn’t really recognise it as such but I was going through the motions. I was taking photos, going to a couple of baby classes, and probably seemed OK to the outside world. It’s hard for me to say but, I felt exhaustion, sadness, and guilt inside, I felt no connection with her, at times I felt hate.

I had a tough second pregnancy. I get pelvic girdle pain (PGP), also known as symphysis pubis dysfunction (SPD). In my first pregnancy, I had crutches at about 7 months; in my second the pain started at 9 weeks. My pregnancy was met with excruciating pain all day and night. It meant I couldn’t move around a lot and got terribly unfit and put on a lot of weight.

So I counted down the days and weeks until the baby arrived. At 42 weeks sat in the ward waiting for an induction (that I didn’t want), I was told I was 6cm dilated and in labour!

Holly arrived into the world after an uncomplicated and quick labour. We had expected another boy so were shocked when we found she was a girl!

I was able to go home after a couple of hours and felt great. We seemed to settle into life with two kids much more easily than I had expected. Holly slept well (as well as a newborn sleeps anyway). This was a stark comparison to Max who had reflux and colic! (he was the reason I became a baby sleep consultant!)

Things went downhill when Holly hit the 4-month sleep regression, at the same time, Max dropped his nap. We had a few weeks of them tag-teaming in the night. Hours spent settling one back to sleep, only to get in bed and for the other one to wake. (read my blog about one such night here)

I’m not great with a lack of sleep at the best of times. Holly’s sleep was another level. She would wake hourly after going to bed, we just never seemed to get a break. Every night I would get into bed and close my eyes, only for her to start crying. This started to play with my mind.

I ended up feeling so anxious about going to bed it became a real issue. I would force myself to stay awake just so I wasn’t woken up by her. Of course this only made the exhaustion worse.

It was a perfect storm of exhaustion, second maternity leave loneliness (it’s different when you’ve not got a group of friends all having babies at the same time), and the start of a national lockdown and the lack of support for new Mums that brought.

Running on almost empty, after another night of crawling to bed at 5 am, it was time to get up. I became hysterical, told Mark I couldn’t do it anymore. I didn’t want to look after her. Couldn’t bear to look at her, I wanted someone to come and take her away.

Being the ever-supportive husband, he took the day off work. He called my Dad round to look after Holly and took me out of the house.

That was my first real breaking point, but for most of the next year, I didn’t really feel any better. I felt OK some days but most of the time it felt like an out-of-body experience. On the bad days, I would picture myself getting in the car and driving off the local motorway bridge. There were days I felt like it would be better for everyone if I wasn’t around anymore. Thankfully in the midst of a national lockdown, we weren’t allowed to leave the house.

Being a sleep consultant means I’m the expert, right?

On the outside, most people probably didnt know there was anything wrong. I would put a brave face on it when I had my business hat on – teaching baby massage and discussing sleep coaching. But at home, the sadness would creep back in.

Sometimes I felt like I knew too much, I knew the impact of an insecure attachment on children. This comes from a parent who is inconsistent with their response, which is exactly what Holly had from me. One minute I would be caring. but this felt false. Inside, I felt that my giving her cuddles only came from the feelings of guilt I had from my emotional distance from her and not from genuine love. The next I would be angry or disconnected, almost uninterested. I would never have done anything to hurt her. I just felt that she could sense that I didn’t love her. This still plays on my mind even now…

For a long time, Mark took over looking after Holly especially at night. He did all the night wakes whilst I would cry under the covers, desperately needing her to settle. Feeling like a failure for not being able to help, but also with no urge to play a part. I even had a panic attack one night when she wouldn’t go back to sleep.

Having experienced depression before I had children. I knew what this was, could recognise what was going on. There were no health visitors and I felt like the GPs were already under enough pressure with Covid-19. The last thing the NHS needed was me knocking on the door, so I just carried on.

I don’t really know what the turning point was. I do know that I started feeling like I needed to take some action about Holly’s terrible sleep. So I took over the bedtimes and night wakes and worked on those. My heart wasn’t in it but I knew I needed to get some more rest. I stuck at my approach and Holly did start sleeping better. She was 14 months when she first slept through the night, and I felt a bit of hope. Hope that I wasn’t a terrible sleep consultant, but also because she responded to me settling her. Holly didn’t hate me, maybe it wasn’t too late and I could ‘fix’ things….

Slowly I tried to rebuild the connection, more cuddles and interaction. This didn’t exactly always feel natural, but the more I did it, the more it started to feel so.

Slowly I noticed I didn’t feel like crying every day.

Today I do feel better generally, although I still have lots of unresolved feelings. I struggle with my self-image, and I don’t like how I look anymore; this post-baby body doesn’t feel like mine. I miss my old self, my old fun, free and independent life. The guilt and sadness when I look at Holly’s baby pictures is definitely something I need to work on, and I will.

Now I genuinely feel my love for Holly, I think we have a great connection. I feel like I understand her now. I’m pretty sure she has no idea that Mummy was poorly for a while. At least I hope so anyway. I’ll talk to her about it one day. I want her to know post-natal depression is nothing to be ashamed of.

Feelings of not being good enough have been present for a long time, but I think these thoughts are heightened when you have children.

I often feel like I could be a better parent, a better wife, a better friend. But my kids, husband and friends don’t see that. They love me for me, flaws and all. Something I need to remind myself of more often. On the days those negative thoughts creep in I try to remember that nobody is the perfect parent. It’s OK to struggle sometimes, and it’s OK not to love every moment.

It’s also OK to need help and to ask for it. Depression whether it’s post-natal or not is not your fault. It doesn’t make you a bad person, and you can come through it.

Where to find help if you need it 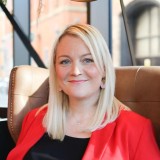 Mother of two, qualified baby massage and yoga instructor, and Manchester-based sleep coach. Passionate about creating a friendly network for new parents and providing parenting support in the early years.